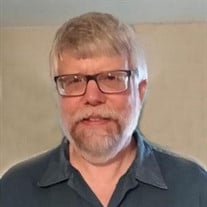 James A. “Jim” Miller, 61, of Mentor, died unexpectedly February 5, 2022 at his parent’s home. He was born April 8, 1960 in East Cleveland, Ohio. He attended Euclid Park Elementary in Cleveland, Margaret Spellacy Jr. High and Collinwood High School. He was a member of the Forest Hill Church of Christ. When his family moved to Mentor in September, 1977 he transferred to Mentor High, from which he graduated the following spring. He also became a member of the Mentor Church of Christ on Burridge Avenue at that time. Jim went to David Lipscomb University in Nashville, TN, earning a business degree. After graduation, he worked at Ray Batts Furniture and UPS. He eventually returned to Mentor and worked at Acimet Manufacturing Company, S-Com, and the Chardon Walmart, among other places. Jim was a talented musician. Under his father’s tutelage he played bass guitar in the “Miller Family Bluegrass Band", which performed in local venues like the Ohio National Jubilee bluegrass show in Manchester and the Gene Carroll Show on WEWS TV in Cleveland. Jim later learned to play acoustic guitar. His repertoire grew to include folk and country songs as well as bluegrass. He loved listening to and playing the music of Gordon Lightfoot, John Denver, and Don Williams. He even composed songs of his own. Jim was an avid sports fan. He loved baseball, football, and boxing, watching current events as well as maintaining collections of old TV and radio broadcasts from past eras. He was a fountain of knowledge when it came to the history of these sports. The last few years before his death Jim worked as a caregiver for his aging parents and disabled younger brother. Although he had his own apartment, he spent most of his time at their house selflessly caring for them at a cost to his own health. Survivors include his parents, Foyster and Constance Miller; and brothers, Jeffrey (Debbie) Miller and Joseph Miller. The family will receive friends from 11 a.m. – 1 p.m. Monday, February 14, 2022 at the Brunner Sanden Deitrick Funeral Home & Cremation Center, 8466 Mentor Ave., Mentor, OH 44060. A funeral service to conclude the gathering will begin at 1 p.m. on Monday at the funeral home. Interment will be in Mentor Cemetery. Please offer condolences at www.brunners.com.

The family of James A. "Jim" Miller created this Life Tributes page to make it easy to share your memories.

Send flowers to the Miller family.