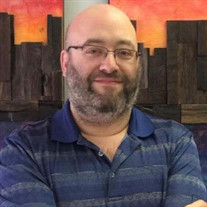 Jason Levine, 46, a longtime resident of Mentor, Ohio, passed away suddenly on September 30th, 2021. Jason was born on February 13, 1975, in Cleveland, Ohio, to Lloyd and Carolyn Levine. He grew up in Mentor. Jason graduated from Mentor High School in 1993 and was a proud member of the Fighting Cardinal Marching Band. Jason also received an Associate's of Applied Business in Human Resources from Lakeland Community College. Jason started his career in the retail grocery industry working at Heinen’s in high school. Over his 25+ year career, he worked for companies like Whole Foods, Wild Oats, and The Fresh Market. During that time he developed a passion for supporting local products and makers. In 2019, Jason was able to realize his dream and opened The Local Flavors Shoppe, his own specialty store highlighting locally made food products and artisan goods in Painesville, Ohio. Jason welcomed every new visitor to the Shoppe saying, “Every product has a story and I would be glad to share it with you. Just let me know which one you want to hear more about!” Jason believed that Cleveland was the best place to live. We had the best sports teams, the best food scene and the best people. And if you didn’t believe him he would show you a video of the time Cleveland was in a movie or on a tv show. He picked Painesville for the site of his first business to honor the memory of his father Lloyd who decades before owned Mr. Muffler just around the corner. And he wanted to do his part to bring something good back into the community that meant so much to his family. COVID closed down the State the week of The Local Flavors Shoppe’s Grand Opening, but thanks to the community and its interest in supporting local, Jason and his dream were able to survive the ups and downs of the pandemic. Being able to talk to customers at the Shoppe and hand out Lollipops to kids coming through was a pure joy for Jason. He was truly able to realize his dream. Jason is survived by the love of his life, his wife, Laura McNally-Levine; daughter, Mia; his mother, Carolyn Levine; siblings, Helene (Michael) Melnik; Hallie (Ron) Jenkins; Craig (Jennifer) Levine; nieces and nephews, Christopher Melnik, MacKenzie Levine, Tyler Jenkins, MacKaleigh Levine; father-in-law, Richard Bailey; and fur-kids Fozzy, Kodi, Heidi, Oscar and Harley and grand fur-kid Toes. Jason was preceded in death by his father, Lloyd Levine; his sister, Rochelle Levine; grandparents, Frida Rivin; Oscar Fidelholtz; Hilda & Harry Levine; and aunt Zelda Mae (Chickie) Levine. The family will receive friends from 3-6 pm Saturday October 9th, 2021 at Brunner Sanden Deitrick Funeral Home & Cremation Center, 8466 Mentor Ave., Mentor, OH 44060. A celebration of life service will start at 6 pm on Saturday at the funeral home. In lieu of flowers please support small businesses and Shop Local. Offer condolences at www.brunners.com.

Jason Levine, 46, a longtime resident of Mentor, Ohio, passed away suddenly on September 30th, 2021. Jason was born on February 13, 1975, in Cleveland, Ohio, to Lloyd and Carolyn Levine. He grew up in Mentor. Jason graduated from Mentor High... View Obituary & Service Information

The family of Jason Levine created this Life Tributes page to make it easy to share your memories.