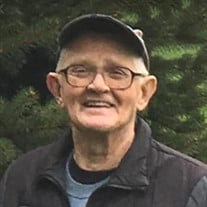 John “Pops” Hagey age 81 of Panama, NY and Mentor, OH, died Friday March 13, 2020 at Hillcrest Hospital, Mayfield Heights, OH. He was born December 18, 1938 in East Cleveland, OH. Mr. Hagey was the former owner of Hagey Floor & Wallcovering, Inc. He took great pride in passing along his skills to his sons and countless others allowing them to create a sustainable life for themselves and their families. He was very generous and would do anything for his family and friends. He served 18 years with the Mentor Fire Department and volunteered for several years with the Panama Fire Department. John was a 1958 graduate of Mentor High School. He was a standout athlete, in football and track. He was a US Navy Veteran serving on the USS Abbot. He was a Boy Scout Master, Troop #380. He loved spending time at his cabin in New York with family and friends hunting, fishing and ATV riding. John and his wife Judy retired to their cabin in New York in 2004 and were snowbirds to Gulfport, FL for five years, before returning to Mentor, OH to be closer to their sons and families. John is survived by his wife of 59 years: Judy (Carlson) Hagey, sons: John (Connie) Hagey Jr. and Jeff (Gina) Hagey, 5 grandchildren: Rachael (Kurt Nageotte), Kyle, Amber (Justin Fumic), Brandon and Danielle (fiancée Matt Hamsher) Hagey, great-granddaughter: Avalynn, sister in law: Martha (Douglas) Smith, nephews: Stephen (Jackie) Preckler and Philip (Philip Trembly) Preckler. Preceding John in death are his parents: Steven and Gladys “Peg” (Humphrey) Preckler and brother: Gary Preckler. A celebration of Pops life will be scheduled for a later date when current public gathering restrictions are lifted at Brunner Sanden Deitrick Funeral Home & Cremation Center, 8466 Mentor Ave., Mentor, OH 44060. In lieu of flowers memorial contributions may be made in memory of John Hagey to the St. Bede Food Bank, 9191 Lakeshore Blvd, Mentor, OH. 44060 or a charity of your choice. Offer condolences at www.brunners.com.

The family of John "Pops" Hagey created this Life Tributes page to make it easy to share your memories.

Send flowers to the Hagey family.