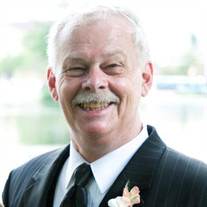 John R. Proegler, 76, of Mentor, passed away, Sunday, January 31, 2021 at home, surrounded by his family. He was born August 2, 1944 in Kankakee, Illinois to the late Walter and Lois Proegler. John proudly served his country in the United States Navy as a jet fighter pilot. He created and operated his own business, an information service for the office furniture manufacturing industry. He was active at the Mentor United Methodist Church, as Lay Leader for several years, as a member of the Chancel Choir and as a founding member of the Men’s Chorus. He was an avid woodworker, making furniture for his home as well as for others. He also enjoyed working with stained glass. His great sense of humor brought smiles to everyone he knew. His community and family were very important to him, and he left a legacy of help and support and true friendship to all the lives that he touched. Survivors include his wife of 54 years, Lynn Donahue Proegler; children, Eric (Jacqueline Risley) Proegler; Lara Proegler and Meghan (David) Paul; grandchildren, Daniel Proegler, Maria and Anthony Mauriello, Gabriel, Reid and Paige Crozier and Andrew Paul; siblings, Kurt (Carol) Proegler, Mark (Amy) Proegler, Joel (Christine) Proegler and Susan Bevis; brother-in-law, Jack Donahue and many nieces, nephews and other loving family members. Preceding John in death are his brothers, Lolt (Gwenn) Proegler and Carl Proegler; mother-in-law, Mildred “Mid” Donahue and father-in-law, Franklin “Bud” Donahue. Due to the Covid-19 pandemic a celebration of John’s life will be held at a later date. Contributions may be made in memory of John to Hospice of the Western Reserve P.O. Box 72101, Cleveland 44192, donate online at www.hospicewr.org or to Heifer International, 1 World Avenue, Little Rock, AR 72202. Arrangements entrusted to the Brunner Sanden Deitrick Funeral Home & Cremation Center, 8466 Mentor Ave., Mentor, OH 44060 Please offer condolences at www.brunners.com.

John R. Proegler, 76, of Mentor, passed away, Sunday, January 31, 2021 at home, surrounded by his family. He was born August 2, 1944 in Kankakee, Illinois to the late Walter and Lois Proegler. John proudly served his country in the United States... View Obituary & Service Information

The family of John R. Proegler created this Life Tributes page to make it easy to share your memories.

Send flowers to the Proegler family.