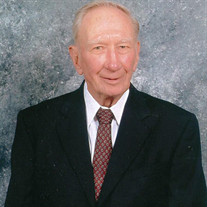 Karl Kenneth Paul, 97, passed away Tuesday, April 6, 2021 at Lake West Medical Center, Willoughby. He was born March 19, 1924, in Cleveland, moved to Willoughby Township (Eastlake) in 1931, and then to Mentor in 1958. Karl graduated from Willoughby Union High School in 1942 and attended Ohio University. He served in World War II with the U.S. Army’s 146th Engineer Combat Battalion in Europe. He retired from Ohio Rubber Company as Traffic Manager, after 32 years of service. Karl was a member of the Traffic Club of Cleveland since 1952, past president of the ORCO Management Club, the Western Reserve Traffic Club, and the Lost Nation Sylvaneers Camping Club. He also was a member of Mentor Senior Center. Karl lived as a child through the Great Depression. He fought in Europe in World War II but rarely talked about it, except to teach his family the songs that he and his soldier buddies sang (cleaned up, mostly). He married, helped raise four daughters, and had his heart broken when his wife died in 1980. He forged on, traveling often to see his daughters and their families. He attended countless sports events of his grandchildren in Maryland, Virginia, North Carolina, South Carolina, Illinois and Iowa. He took an active role in the lives of his great-grandchildren. He attended hundreds, maybe thousands, of Mentor High football, basketball, wrestling, baseball and ice hockey games and matches. The school honored him a couple times for his support. And he played golf once or twice a week, right up into last fall. He gave up golf about 2,000 times because of his “stupid putter,” but he always came back. His family believes that just about anyone would want to grow up to be like Karl Paul. He is survived by daughters, Karol (David) Liggett of Willoughby Hills; Susan (Stephen) Lyttle of Matthews, N.C.; Shari (Michael) Georgoff of Emmitsburg, MD; and Lauri (Jeffrey) Stoneking of Bettendorf, Iowa; 9 grandchildren: Elizabeth (Jason) Baker, Ryan (Shelley) Lyttle, Daniel Lyttle, Nicole (Kyle) Vaughn, Stephanie (Joshua) Munday, Meghan Georgoff, James Georgoff, Jack Stoneking and Nicholas Stoneking; 8 great-grandchildren; sister: Joan (Roger) Wells; brother-in-law, Phillip Smith; sister-in-law, Kaye Foley; and nieces and nephews. He was preceded in death by wife, Anne; parents, Clarence and Ollie; and step-sister Marvene Bowman Henry. The family will receive friends from 2:00 - 4:00 & 6:00 - 7:00 pm, on Wednesday, April 21, 2021 at Brunner Sanden Deitrick Funeral Home and Cremation Center, 8466 Mentor Ave., Mentor, OH 44060. Masks are required and social distancing is encouraged during all publicly attended events. A memorial service will be 7:00 pm, Wednesday, April 21, 2021 at the funeral home. Masks are required and social distancing is encouraged during all publicly attended events. Private family inurnment will take place in Mentor Cemetery, Mentor, OH. In lieu of flowers the family request contributions may be made to Mentor High School Athletic Department payable to Mentor High School or Mentor Schools, 6477 Center St., Mentor, OH 44060. Please offer condolences at www.brunners.com

Karl Kenneth Paul, 97, passed away Tuesday, April 6, 2021 at Lake West Medical Center, Willoughby. He was born March 19, 1924, in Cleveland, moved to Willoughby Township (Eastlake) in 1931, and then to Mentor in 1958. Karl graduated from Willoughby... View Obituary & Service Information

The family of Karl Kenneth Paul created this Life Tributes page to make it easy to share your memories.

Send flowers to the Paul family.