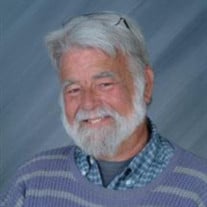 Kim McQuaid, age 74 of Mentor, passed away Friday April 22, 2022. He was born November 2, 1947 in Norwalk, Connecticut; the son of Francis Walter McQuaid, a retired book collector and WWII Veteran, and Margaret Fitzgerald Phelan, a beautician. He was raised in the Boothbay region of Maine. Kim graduated from Boothbay Region High School (Maine) in 1965. In his youth, he worked at his parents’ rental cottages meeting unique guests and traveling professionals; he also spent considerable time in the local library, which ignited his love for history and books. Kim became an avid antiquarian book collector and gifted artist, specializing in the drawing of portraits and illustrations of the human body. He later worked as an art therapist at the Dixon State School, a psychiatric hospital in Dixon, Illinois. Kim received his Bachelor of Arts Degree in History from Antioch College in 1970. He went on to receive his Master of Arts and Doctorate in Philosophy from Northwestern University in 1975. He was an honored recipient of the Woodrow Wilson Teaching Fellowship in 1970. Dr. McQuaid began his teaching career as an assistant Professor of History at Lake Erie College in 1977. He was a Mary Bell Washington Visiting Professor of History at the University College Dublin (Ireland) from 1985-1986, and in 1995, he spent a full year in Penang, Malaysia as a visiting lecturer at the University of Science Malaysia. He accepted a full-time position as an Associate Professor at Lake Erie College in 1989 and retired from Lake Erie College as Professor Emeritus in 2010. Kim was a devoted supporter and member of several space advocacy and environmental health groups. A proud non-holder of a driver’s license, Kim was an enthusiastic explorer of the northern provinces of Canada (Newfoundland, Nova Scotia, and Labrador) and Norway. Kim was additionally a published researcher and author of books on post-Civil War U.S. History, 20th century business/government relations; U.S. social welfare policy, political, economic and social history; the space age; and Ethno-religious tensions in the late Ottoman Empire. His published books include “The Anxious Years: America in the Vietnam-Watergate Era (1990);” “Creating the Welfare State: the Political Economy of 20th Century Reform: Revised Edition;” “Uneasy Partners: Big Business in American Politics, 1945-1990, the American Moment;” “A Response to Industrialism: Liberal Businessmen and the Evolving Spectrum of Capitalist Reform;” “Big Business and Presidential Power: from FDR to Regan;” and “The Real and Assumed Personalities of Famous Men: Rafael De Nogales, T.E. Lawrence, and the Birth of the Modern Era 1914-1037.” Dr. McQuaid is preceded in death by his parents, Francis Walter McQuaid and Margaret Fitzgerald Phelan, and brother, Kevin McQuaid. He is survived by friends, colleagues, and extended family who will remember his remarkable contributions to the academic community, friendly personality, hearty laugh, entertaining letters, stories of travel and adventuring, boundless aspirations, and a lifelong passion for teaching, knowledge, and history. A celebration of Kim’s life will be held 10:00 am -12:00 pm, on Saturday June 4, 2022 in the Louise Price Social Parlor located in College Hall at Lake Erie College, 391 W. Washington St., Painesville, OH 44077. Contributions may be made in Kim’s memory to Lake Erie College's 'Take a Seat' Campaign, Lake Erie College, 391 W. Washington St. Painesville, OH 44077 Attn: Institutional Advancement. As part of a theater seat in the Rickel Theater will be purchased in Kim's honor. Arrangements entrusted to the Brunner Sanden Deitrick Funeral Home & Cremation Center, 8466 Mentor Ave., Mentor, OH. Offer condolences at www.brunners.com.

The family of Kim McQuaid created this Life Tributes page to make it easy to share your memories.

Send flowers to the McQuaid family.