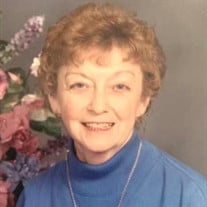 Marilyn J. Clark, age 92, passed away Wednesday, November 18, 2020, at the residence of her son Rick and daughter-in-law Patty. She was born August 12, 1928, in Cleveland, Ohio. She grew up in Cleveland and graduated from Shaw High School in East Cleveland. For many years, Marilyn worked as a nurse at Euclid Hospital, retiring in 1988. She received her nurse’s training at Huron Road Hospital in East Cleveland. In one of her nursing classes, she met Miriam Clark and the two became good friends. On a summer day in 1950, Miriam arranged a picnic for her brother, Richard, to meet Marilyn, and before long, Marilyn and Richard were engaged. They were married on August 4, 1951, at East Cleveland Baptist Church. They had four sons. Socializing with family and friends was a big part of Marilyn’s life. On Tuesdays, she and her sister, Arlene, enjoyed going out to lunch, favoring such local restaurants as Applebee’s and the Manhattan Deli. On Wednesdays, Marilyn enjoyed lunches out with a longtime group of friends at such establishments as Dino’s, Davitino’s, and TGI Fridays, among others. For years, Marilyn’s children and grandchildren gathered at her home on Friday evenings to visit and have pizza together. Marilyn was a longtime member of the Mentor United Methodist Church. She attended Sunday services with her sister and brother-in-law, Arlene and Roger, and other friends, and the group had a tradition of dining out afterward at Bob Evans. Marilyn was a patron of the Mentor Public Library and always had a novel to read. Throughout the 1960s she played bridge with a group of ladies in her neighborhood. In the 1970s, Marilyn and Richard, along with Arlene and Roger, learned to square dance and they spent many Saturday evenings do-si-do-ing with a congenial group of friends they met at the dances. Marilyn also enjoyed quilting and gardening. She is survived by her sons, Richard (Patricia), Robert (Cyndi), Randell, and Dale (Elaine); grandchildren, Brenna Borecky (Steve), Matt (Kim); Samantha Bottari (Jonathan); Sarah, Andrew, and Melanie; great-grandchildren, Evie and Lydia Borecky, Dyllan Rivera, Emma Clark, and Luke Bottari; and sister, Arlene (Roger) Sauer. Marilyn was preceded in death by her husband, Richard E. Clark, on April 22, 2000, and her parents, Herbert and Florence Warman. A private family graveside service will be held at Mentor Cemetery. In lieu of flowers, contributions in Marilyn’s memory may be made to Hospice of the Western Reserve, P.O. Box 72101, Cleveland, OH 44192. Online donations may be made at www.hospicewr.org. Offer condolences at www.brunners.com.

Marilyn J. Clark, age 92, passed away Wednesday, November 18, 2020, at the residence of her son Rick and daughter-in-law Patty. She was born August 12, 1928, in Cleveland, Ohio. She grew up in Cleveland and graduated from Shaw High School... View Obituary & Service Information

The family of Marilyn J. Clark created this Life Tributes page to make it easy to share your memories.