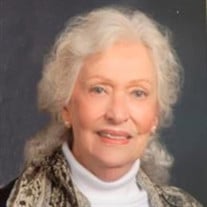 Martha J. Wegert (nee Shaw), 89, longtime resident of Gates Mills, passed away on July 28, 2020 at Grosse Pointe Manor nursing home in Niles, IL. She was born July 2, 1931 in Cambridge, Ohio and raised in Martins Ferry, Ohio. She earned a Bachelor’s degree from Bowling Green State University and a Master’s degree from Kent State University. In 1951, Martha married Otto Wegert while they were both attending Bowling Green State University, where she was a member of Kappa Delta sorority. They were happily married for 64 years until Otto’s death in 2015. Martha taught elementary school for 33 years. She loved and excelled at teaching and considered her students to be her extended family. Martha always encouraged her students to be the best that they could be and she received several “Most Influential Teacher” awards from Mayfield High School seniors. She retired from Millridge School in Highland Heights, Ohio in 1990. She continued to receive birthday cards and good wishes from former students throughout her life. After retiring, Martha was active in the Gates Mills Community Club (President 1994 -96) and the Gates Mills Garden Club (President 2003-2005). She and her husband were members of the Gates Mills Players and Willoughby United Methodist Church. They traveled extensively in the United States, Western Europe, and Canada. They enjoyed Broadway Theatre and playing bridge with friends. She was an avid Browns and Cavaliers fan. Survivors include her sons Thomas R. Wegert (wife Ellen) of Winnetka, Illinois and James A. Wegert (wife Pamela) of Lancaster, Pennsylvania; grandchildren Elizabeth, Katherine, Olivia, Joshua and Tyler; great grandchildren Hayes and Grant; sister Evelyn and brother Willard. She was preceded in death by her parents Willard and Nenetah Shaw, and her older brother John. Contributions may be made to the Willoughby United Methodist Church at 15 East Spaulding St., Willoughby, OH 44094. Arrangements Entrusted to Brunner Sanden Deitrick Funeral Home & Cremation Center, 8466 Mentor Ave., Mentor, OH 44060. Please offer condolences at www.brunners.com

The family of Martha J. Wegert created this Life Tributes page to make it easy to share your memories.

Send flowers to the Wegert family.