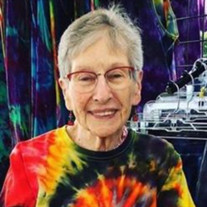 Maxine Shiffman, 91 of Hudson, OH, died on November 4, 2020, in the comfort of Hospice Care at the Laurel Lake Senior Community. She was surrounded by loved ones. Born to Beatrice (Schecht) and Harry Wilkes on August 3, 1929 in Brooklyn NY, and raised by her mother and her second husband, Irving W. Adler, Maxine’s “real” father. She was predeceased by her beloved partner of 20 years, Frank Green. Maxine studied at The Fashion Institute of Technology and became a textile designer for Lowenstein & Sons in the Fashion District in New York City. After relocating with her family to Central NY, she became a draftsperson for the NYS Department of Transportation. After retirement, she relocated to Painesville, OH, to be close to family. A few years after Maxine met Frank, they moved to the Laurel Lake Retirement Community as active seniors. Maxine had a life of creativity and volunteering. As a young mother she painted a mural of farm animals on the wall of the nursery, sewed puppets with hand-painted faces, and made her children costumes that always won “best” recognition at holiday parties. Her cooking and baking talents made growing up with her a daily gourmet feast. She made French meat pies, blintzes, sculpted watermelon boats, chocolate mousse, and caramel custard. She was a mainstay at PTA meetings and bake sales, co-led scout troops, and chaperoned their camping trips. She was an amazing knitter, creating sweaters with intricate designs for everyone in the family. In recent years she continued to knit beautiful hats for the homeless and adorable knit stuffed animals for her great-granddaughters to snuggle. Her three children, four nieces, and nine grandchildren all received handmade “Grandma Quilts” for their high school graduation gifts. Each one is unique, all are signed and dated, and all are profoundly cherished. Maxine quilted wall hangings and special anniversary gifts, and lap blankets for sick friends. Back in the early 1980s, she won first place for her quilt at the NY State Fair. She had a side gig selling handmade men’s neckties for 10 years, mostly so she had an excuse to go to every possible juried arts and crafts show. She is survived by her children, RitaMarie (Thomas) Guthrie, Naomi Shiffman, and David (Karen) Shiffman, her grandchildren, Benjamin (Sheena) Guthrie, Daniel (Amanda Strauss) Guthrie, Delia Guthrie, Hannah Shiffman, Nate Shiffman, Vonya Shiffman, Devorah Shiffman, Sam Shiffman, and Lucie Shiffman, her great-grandchildren, Beatrice, Rebecca, and Liana, and her former spouse of 25 years, Sidney J. Shiffman, the father of her children. Due to Covid19 restrictions, a socially-distanced, private family funeral will be held. Arrangements entrusted to Brunner Sanden Deitrick Funeral Home and Cremation Center, Mentor, OH. In lieu of flowers, donations may be made to the Laurel Lake Foundation, Planned Parenthood, or Temple Beth Shalom of Hudson Ohio.

Maxine Shiffman, 91 of Hudson, OH, died on November 4, 2020, in the comfort of Hospice Care at the Laurel Lake Senior Community. She was surrounded by loved ones. Born to Beatrice (Schecht) and Harry Wilkes on August 3, 1929 in Brooklyn NY,... View Obituary & Service Information

The family of Maxine Shiffman created this Life Tributes page to make it easy to share your memories.

Send flowers to the Shiffman family.