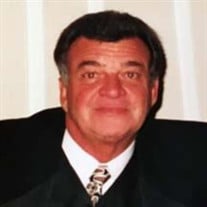 Ralph M. Satterfield, age 84 of Madison, died Wednesday, December 9, 2020 at the home he and his wife, Laurelie built in 1973. He was born July 1, 1936 in Fairmont, West Virginia. Ralph is a veteran of the United States Marine Corps. He was also a life member of the Elks 549 in Painesville, American Legion Local Post 112, a 32nd Degree member of the Masonic Lodge 307 in Madison and the Al Koran Shrine. Ralph worked for the Austin Company for many years and was a Labor Foreman for Laborer’s Local 310. After retiring from Local 310, he and Laurelie opened a Travel Agents International franchise in 1987 which allowed them to travel extensively. He enjoyed traveling the world, golfing, and reading. Most of all he enjoyed spending time at home with his family and friends. Many a night was shared around a fire with a good drink and a better story. Ralph was a “shot and a beer” kinda guy, but put him in a tuxedo with a good martini and he was the most interesting man in the world. In the words of a dear friend: “He is bigger and stronger than any of the tallest skyscrapers he built.” Survivors include his wife of 62 years, Laurelie (nee Child) Satterfield; children, Bretta (Doug) Dickerson, Amy Garmone, and Carrie (Bruce) Hurd; grandchildren, Anna Dickerson, Zakary and Brock Hurd, and Michael “MJ” and Nick Garmone; great-grandson, Logan Anthony Dickerson; nephews, David (Linda) Yankie, Raymond (Ann) Croaston, and Craig (Theresa) Croaston; nieces, Linda (Rick) Pruitte and Lori Croaston. He is also survived by his furry friend Tootsie and many other loving family members and dear friends. Preceding Ralph in death are his parents, Leonard and Dortha; siblings, Alice, Eloise, Charlie, and Raymond (Gerri); and nephews, Todd and Corey Croaston, Ronnie and Kenny Yankie. Due to Covid-19 restrictions, in-person services will be private. The public may join us at 11:00 a.m. Saturday, December 19 via livestream at www.facebook.com/chapelumc. Arrangements entrusted to Brunner Sanden Deitrick Funeral Home and Cremation Center, Mentor, OH. In lieu of flowers contributions may be made in memory of Ralph to Maple Leaf Community Residences, P.O. Box 755, Chardon, OH 44024 or online at mlcr.org. Or Chapel United Methodist Church, 2019 Hubbard Road, Madison, OH 44057. Offer condolences at www.brunners.com.

Ralph M. Satterfield, age 84 of Madison, died Wednesday, December 9, 2020 at the home he and his wife, Laurelie built in 1973. He was born July 1, 1936 in Fairmont, West Virginia. Ralph is a veteran of the United States Marine Corps. He was... View Obituary & Service Information

The family of Ralph M. Satterfield created this Life Tributes page to make it easy to share your memories.

Send flowers to the Satterfield family.