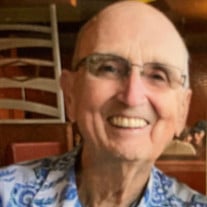 Richard “Dick” C. Byers, age 83 of Mentor, passed away Friday, July 2, 2021 at his home. He was born on September 12, 1937 in Cleveland, OH to the late Charles and Margaret Byers. While a young boy, Dick’s family moved to Willoughby, OH, where they were able to be close to their extended Blakemore family. Throughout his youth (and until Dick’s passing), his best friend Leonard was at his side. Dick graduated from Willoughby Union High School in 1956 and he continued to meet with his graduating classmates on a regular basis throughout his lifetime. Dick continued his education earning a Bachelor’s Degree in Business Administration from Cleveland State University. During this time, he also began working at General Electric which eventually took the family from Cleveland, OH to Lisle, IL, where he made life-long friends. Many of these came from the estimated 15 years he spent at various pools watching his sons swim for their respective high schools and colleges. After returning to Cleveland and retiring from General Electric, after a 30+ year career, Dick spent some of his spare time singing in choirs and a barbershop quartet, bowling, attending St. Gabriel Church, and researching his family history. Most of all, he loved spending time with the many dogs he rescued, visiting with his kids and grandkids, enjoying friends, and satisfying his sweet tooth. His large smile, loud and infectious laugh, and his overall good nature is already terribly missed by those whose lives he touched. Dick is survived by his children, Michael (Karen) Byers, Dave (Amy) Byers, Rick (Pam) Byers, Steve (Sue) Byers, and Dan (Lauren) Byers. Dick will also be fondly remembered by his 15 grandchildren: Cole, Katie (Jon), Ashley, Kyla, Bailey, Riley (Emily), Talie, Stratton, Tyler, Justin, Grace, Alex, Taylor, Logan and Sydney. He also leaves behind one great-grandchild, David, and his beloved dog, Maggie. He was preceded in death by his parents. The family will receive friends 5-7 pm, Friday, July 9, 2021 at the Brunner Sanden Deitrick Funeral Home & Cremation Center, 8466 Mentor Ave., Mentor, OH 44060. A memorial service will be held at 11 am, Saturday, July 10, 2021 at St. Gabriel Catholic Church, 9925 Johnnycake Ridge Road, Concord Twp., OH 44060. Please meet at the church. Inurnment will take place in All Souls Cemetery, Chardon at a later date. Contributions may be made in memory of Dick to the Lake Humane Society, 7564-E Tyler Boulevard, Mentor, Ohio 44060. Send flowers and offer condolences at www.brunners.com

The family of Richard "Dick" C. Byers created this Life Tributes page to make it easy to share your memories.

Send flowers to the Byers family.