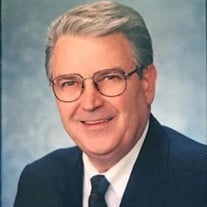 Dr. Richard Anthony Pryatel “Doc” of Mentor, passed away on March 30, 2022 at the age of 81. He was a beloved husband, father, and grandfather and will be greatly missed by all. Survivors include his wife Mary Ann (Balasko) Pryatel; his three daughters, Sherri (husband Olaf) Schabbach, Wendi (husband Todd) Bergdoll, Lorri (husband Mike) Kaighin; his 7 grandchildren Emory Bergdoll, Gracie Bergdoll, Jackson Bergdoll, Lindsay Kaighin, Wyatt Kaighin, Colby Kaighin, and Shiva Schabbach; his two step-daughters Candy Kucinski and Ali Hebner and her children AJ Moses and Kenzie Moses. He is preceded in death by his parents Dr. Anthony Pryatel (originally Prijatel) and Clara (Holst) Pryatel of Lorain, his sister Shirley (husband Edward) Higgins of Amherst, and his brother Robert Pryatel of Lorain. Richard was born on February 22, 1941 in Lorain, Ohio and graduated from Lorain High School in 1958. He was a proud graduate of The Ohio State University for both undergraduate as well as dental school. He graduated from Ohio State College of Dentistry in 1967, carrying on the family legacy of a rewarding and fulfilling career in the medical field. Richard was recognized as a “Top Dentist in America” and was awarded the distinction of Life Member of The Ohio State University Dental Alumni Association. He loved learning and was proud of his continuing education and earning the highest classification of 6 PLUS at the prestigious world-class Pankey Institute for Advanced Dental Education Training as well as the Dawson Academy for Dental Continuing Education. He gave amazing care to all his patients and lived by the motto, “People don’t care what you know until they know that you care” and he did just that. He cared for all of his patients by giving them exceptional, individualized dental care. He enjoyed a very successful dental practice in Mentor, Ohio for 50 years and was happy to join Fioritto Family Dental toward the end of his career. Richard was a loyal Buckeye fan and a season ticket holder for Ohio State football games for over 60 years. He was a gifted musician and played many instruments including the piano, guitar, and banjo. But, his favorite instrument to play was the accordion. He was a loyal patron of the arts and was a season ticket holder of the Cleveland Play House Theater. Richard was an avid golfer and enjoyed playing in his golf league. He loved challenging his mind daily by doing the New York Times Crossword Puzzles (in ink), Sudokus, and Jumbles. He was very generous - generous with giving thoughtful gifts, giving of his time, and sharing his knowledge. He sponsored local youth athletics and supported Mentor High School’s work-education program by mentoring students pursuing careers as dental assistants. Richard made a difference, touched many lives, and lived a life well-lived. In Slovenian “Pryatel” means “not just friend, but good-good friend” and Richard Pryatel was true to his name. He was very loyal and a true friend in every sense of the word. If you ever needed him, he was always there. As he often liked to say, “Now ain’t that something?” QPQ. The family will receive friends from 1-3 pm on Saturday April 2, 2022 with a memorial service at 3 pm Saturday at the Brunner Sanden Deitrick Funeral Home & Cremation Center, 8466 Mentor Ave., Mentor, OH 44060. In lieu of flowers, memorial contributions may be made to Cleveland Clinic Hospice at https://my.clevelandclinic.org/giving/make-a-gift?q=hospice. Please offer condolences at www.brunners.com.

Dr. Richard Anthony Pryatel &#8220;Doc&#8221; of Mentor, passed away on March 30, 2022 at the age of 81. He was a beloved husband, father, and grandfather and will be greatly missed by all. Survivors include his wife Mary Ann (Balasko) Pryatel;... View Obituary & Service Information

The family of Richard A. Pryatel DDS created this Life Tributes page to make it easy to share your memories.