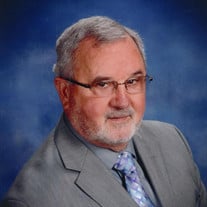 Richard M. Rackovan, 85, of Mentor for the past 51 years, died December 31, 2020 at Euclid Hospital. He was born February 9, 1935 in Marstellar, PA. Mr. Rackovan was a teacher at Euclid High School from 1964 to 1986, teaching both chemistry and math. He had Masters Degrees in both and taught at Cleveland State as well. Upon retirement from teaching he worked as a financial planner for AIG Valic. He enjoyed travel and toured most of the regions of the globe as well as extensively in the United States. He was an avid reader and gardener. He stayed active playing tennis until his later years and it was a lifelong passion. His volunteer work included being a “Red Coat '' at Playhouse Square and assisting St. Vincent DePaul’s charitable works. Survivors include his children, Mitchell (Christine) Rackovan, Lynne (Bruce) Winter, Ann (Nicholas) Cindric, and Greg (Julia) Rackovan, his brother John (Patricia) Rackovan, ten grandchildren, eight great grandchildren and many nieces, nephews, and other family members. He was preceded in death by his wife, Carolyn J. Rackovan; infant daughter, Susan Marie Rackovan; parents, Andrew and Mary Rackovan; and his brothers, Walter “Butch” Rackovan & Andrew Rackovan and his sister Joan (Rudy) Ludwig. A funeral mass in memory of Richard will be held 9:30 a.m. Saturday, July 24, 2021 at St. John Vianney Church, 7575 Bellflower Rd., Mentor. A luncheon will follow immediately on the church grounds. Inurnment will be held in Mentor Cemetery, 6881 Hopkins Rd, Mentor on Saturday, July 24, 2021 at 1 p.m. (Please meet at the cemetery.) In lieu of flowers, contributions may be made to the National Multiple Sclerosis Society (www.nationalmssociety.org) or the Epilepsy Foundation (www.epilepsy.com). Arrangements entrusted to the Brunner Sanden Deitrick Funeral Home & Cremation Center, 8466 Mentor Ave., Mentor, OH 44060. Please offer condolences at www.brunners.com.

The family of Richard M. Rackovan created this Life Tributes page to make it easy to share your memories.

Send flowers to the Rackovan family.