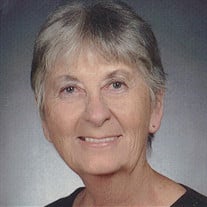 Bobbie Farcas, 88, of Mentor, OH passed away peacefully on the morning of February 17, 2020 at Symphony at Mentor Assisted Living. She was born April 22, 1931in Pittsburgh, and grew up in Mount Lebanon, PA. Throughout her childhood, her family would spend summers at the family farm near Clarion, PA, where they were joined by many out-of-state relatives who also spent summers there. After graduating from Muskingum College, now known as Muskingum University, Bobbie worked as a school teacher. In 1955, she met and married George Williams. George was a lieutenant in the U.S. Army, and together they spent the first two years in Nice, France where George was stationed. After returning to the U.S. from France, they decided to start a family and ended up having three children together; Bruce in 1957, Carolyn in 1959, and Kent in 1961. Bobbie loved to travel! Some of her destinations included Japan, The Ukraine, Alaska, several European countries, and was even baptized in the River Jordan while visiting Israel. She and her second husband, George S. Farcas, split their residence between Strongsville, OH and Ft. Lauderdale, FL. Anyone who knew George Farcas knows that they played A LOT of golf. In addition to playing golf, Bobbie enjoyed cooking, hostessing parties and family gatherings, doing crafts, playing games, and being very active in her church. Most of all, she enjoyed spending time with her five grandchildren. Survivors are her children, Kent (Joni) Williams Sr., Bruce (Cathy) Williams, and Carolyn Williams; grandchildren, Kent Jr., Greg, Brian, Melissa (Cody), and Kristine (Parker); and her great grandchildren, Alex, Hunter, and Owen. She was preceded in death by her parents, Herbert and Nelle (Burnham) Roberts; and her brother, Raymond Roberts. The family will receive friends from 6-8 p.m. Wednesday, February 26, 2020, at the Brunner Sanden Deitrick Funeral Home & Cremation Center, 8466 Mentor Ave., Mentor, OH 44060. A funeral service in honor of Roberta’s life will be held at 8 p.m. on Wednesday, February 26, 2020, at the funeral home. Interment will be at Clarion Cemetery, Clarion, PA. In lieu of flowers, contributions may be made to an Alzheimer’s Association of one’s choice. Send flowers and offer condolences at www.brunners.com.

Bobbie Farcas, 88, of Mentor, OH passed away peacefully on the morning of February 17, 2020 at Symphony at Mentor Assisted Living. She was born April 22, 1931in Pittsburgh, and grew up in Mount Lebanon, PA. Throughout her childhood, her family... View Obituary & Service Information

The family of Roberta Jean "Bobbie" (nee Roberts) Farcas created this Life Tributes page to make it easy to share your memories.

Bobbie Farcas, 88, of Mentor, OH passed away peacefully on the...