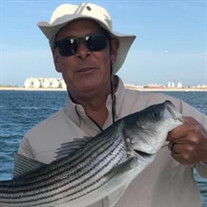 Scott R. White, 57, of Mentor, passed away November 1, 2020 at his home with his family by his side. He was born June 12, 1963 in Columbus, OH. A man of honor and integrity, Scott was a proud U.S. Navy veteran having once served on the U.S.S. America with many other tours of duty. Scott worked as the Harbor Master at the Cleveland Yachting Club, which he considered his second home. His hobbies included fishing, golfing, sailing, landscaping, and enjoying sports. He enjoyed spending time with his son Drew, whom he considered the greatest accomplishment in his life. His life revolved passionately around his family and friends, with selfless acts of service to all he knew. Survivors include his son Drew White; his wife, Judith White; father, James (Marilyn Smith) White; brother, Rob (Jen) White; sister, Peggy (Mark) Mack; step sons, William (David Kowalski) Mattingly, and Nicholas Mattingly; nieces and nephews, Hadley White, Robert Mack, Donald Gress, Mikayla Gress, Remi Vihtelic, and Sydney Vihtelic; father in law, Robert (Diane) Vihtelic; granddaughter, Evelynn Marie Mattingly; brother in law, Bob (Marilyn) Vihtelic; sister in law, Mary Gress; and many other loving family members. He was preceded in death by his mother, Mollie White; nephew, David Mack; maternal grandparents, Ike and Della Robinette; his paternal grandparents, Howard and Elizabeth White; and mother and father in law, Donna and Fred “JG” Mika. The family will receive friends from 1-5 p.m. Sunday, November 8, 2020 at the Brunner Sanden Deitrick Funeral Home & Cremation Center, 8466 Mentor Ave., Mentor, OH 44060. A funeral service with military honors in memory of Scott will be held 5 p.m. on Sunday at the funeral home. Private family inurnment will be held in Mentor Cemetery at a later date. Contributions may be made in Scott’s memory to the Wounded Warrior Project, P.O. Box 758516, Topeka, Kansas 66675-8516, donate online at www.woundedwarriorproject.org., or Hospice of the Western Reserve, P.O. Box 72101, Cleveland, OH 44192. Donate online at www.hospicewr.org. Send flowers and offer condolences at www.brunners.com.

Scott R. White, 57, of Mentor, passed away November 1, 2020 at his home with his family by his side. He was born June 12, 1963 in Columbus, OH. A man of honor and integrity, Scott was a proud U.S. Navy veteran having once served on the U.S.S.... View Obituary & Service Information

The family of Scott R. White created this Life Tributes page to make it easy to share your memories.

Send flowers to the White family.